Kobe Bryant’s shoe signature line is HUGE and it’s still growing, even though his career have come to an end now. I’m a lot of you like Kobe’s shoes and if you play basketball with them, this is the right place to choose the best Kobe shose.

Here are my recommendations for the best Kobe shoes – performance is the main factor here since we’re going to be playing ball with these. Also, I won’t touch the old models since they’re outdate, hard to find and expensive. I strongly think it’s best to stay with the latest releases. I will talk about six models.

This is the big one. Not the newest one, but in this case – it’s amazing. If you can’t decide which model you want and don’t care about the looks – just go with this one. You’ll get one of the most versatile traction patterns ever – both indoors and outdoors. The pattern on these is durable and in favor of hard outdoor play. Then you got a full-length Lunarlon midsole for cushioning. It’s a guard-oriented setup – firm and responsive.

Support is awesome for a low top, which is normal since most Kobe’s shoes seem to have great support. Most of it comes from a snug, one-to-one fit.

They are definitely not expensive right now because of the age, so that’s awesome too!

Yeah, so this is pretty much the Kobe 8 SYSTEM with a few tweaks and a STUPID price increase. That’s the truth – the shoes are slightly better than the original but it should not cost that much more. That’s why it’s not my #1 recommendation. Well, I guess it’s my #2 recommendation 😀 So yeah, pretty much every performance aspect is the same except a few things. The woven upper is a bit more durable, there’s a carbon fiber heel plate instead of a TPU one.

Lastly, the build quality overall seems to be a bit better. And also you got FLYWIRE for extra lockdown. These are the things that were added. Whether it is worth it or not – I will leave you to decide yourself.

This is the third Kobe 9 edition – and the best one. It does come with a heavier price tag, but remember, it’s a bit newer than the Kobe 8 – so are the technologies. It has some improvements over the Kobe 9 and Kobe 9 Elite Low.

Traction is just as awesome as the Kobe 8’s. It’s supe good both indoors and outdoors. Damn, I wish more today’s shoes would offer that. You have full-length Lunarlon midsole for cushioning, which is again, firm and reponsive. Not a choice for big players. The shoe has FLYWIRE for foot lockdown, a carbon fiber heel plate and a very durable mesh upper. That’s definitely an awesome package right there.

Honestly, the top three shoes here all are AWESOME, I only prefer one over the other SLIGHTLY, so getting any of them is a good move in my book. It’s a shame that the newer realeses didn’t really come up close.

The latest, but not the best Kobe shoe (still pretty good) that is actually better than the Kobe 11 in my opinion. Guess what, it’s a guard-oriented setup just like always.

The aggressive traction pattern is worth talking about alone. This is hands down the best traction on a Kobe shoe yet. Indoors, outdoors, clean courts, dirty courts, whatever. Take a look at that pattern and you already know it’s a monster. You do also get ful-length Lunarlon cushioning, which is probably the firmest setup out the six shoes I’m talking about. I think mainly light and quick guards will only enjoy these.

You got a Flyweave upper, which is very soft, light and has no restrictions. Those who are looking for massive support should stay away from the Mentality II. Overall though, it’s a solid choice – and it’s cheap.

Everyone board the hype train. Oh wait, it’s already gone. The Kobe 11 was super anticipated, but I think it really lacked in some spots, so it’s by far not perfect. Traction is very sensitive to ANY dust or dirt. If you come across any of that, the shoe starts sliding like crazy. It’s not even worth talking about outdoors. If you DO have access to clean courts, then you’re perfectly fine.

Cushioning is I think the strong part of the shoe. It’s a full-length Lunarlon midsole with a built-in ZOOM AIR unit in the heel. A very well-balanced setup that would fit bigger players too. Also, you can customize your own cushion setup at NikeID for an extra price.

Lastly, you got a Flykint upper with a TPU layer under it for extra durability. A great combination.

Definitely not a very well-known model, but it’s actually one of the newest ones right now. If you’re looking for a budget-friendly shoe that’s pretty decent and doesn’t have any major flaws, then the Venomenon 5 would fit you.

This your go-to outdoors shoe by Kobe, I forgot to mention that. Traction on these seems to be made FOR outdoors – and you rarely see that these days. So obviously it will work fine indoors too. 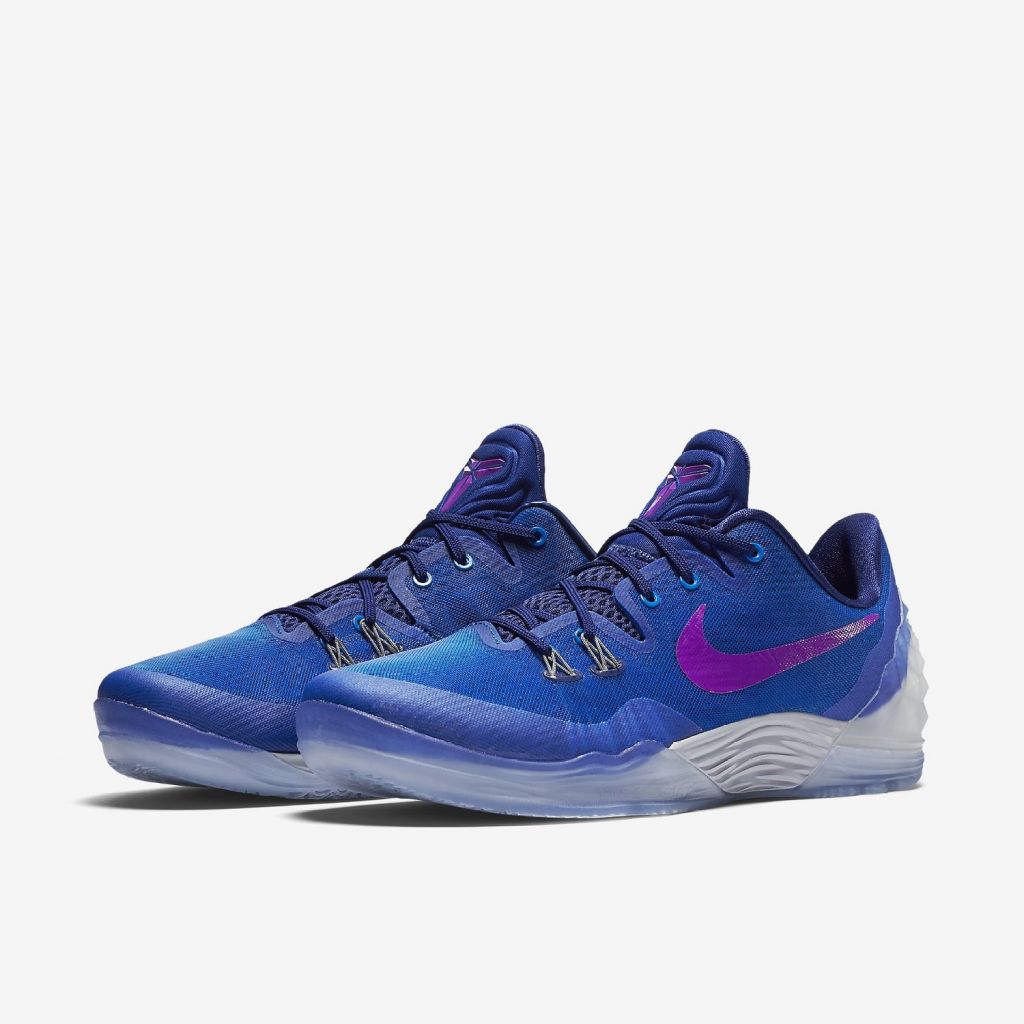 You got ZOOM AIR cushion units in the heel and forefoot areas. A very “in the middle” setup, meaning that it’s not too firm, but also not the softest one as well. Could fit both small and big guards.

You have great support with plenty of features, including FLYWIRE. Awesome fit and support for a low top. The upper is made of mesh, but it’s reinforced with Fuse in some critical spots. Another nice addition in my book.

The only nitpick that I can point out is the very tight fit. If you don’t like your shoes feeling very tight, go up half a size.

Alright, that’s it for this best Kobe shoes spotlight! I really did pick my personal favorites and also checked out a lot of reviews and feedback, so you’re getting some useful stuff. USE IT WISELY! 😀